Jitske Schols (1969) grew up in the middle of a forest where they had the most beautiful property. Instead of having a wealthy lifestyle, as many people might think, they were anything but rich. At an early age she started to realize that people are not so interested in the facts, but according to Jitske life is all about interpretations. This thought has led her to put things into perspective. In her photography she refers to contradictions, preferably to the other side of the story, regardless of any prejudices. Subsequently the viewers will form their own opinion about the things they see and the things they believe.

After working for 20 years as a communications advisor, Jitske Schols decided to commit herself to photography. In short time she built up an impressive oeuvre with an own unique signature: her portraits are mostly black and white and immediately recognizable by their combination of simplicity, melancholy and rawness.

Songs for soprano, etude #1
In the photo series Songs for soprano, etude #1, Jitske Schols makes an imaginary journey back to the 19th century and visits the estate of Ewijckshoeve in Lage Vuursche. Schols grew up at this estate and enjoyed a happy and peaceful youth surrounded by nature, not being aware that this place formed the backdrop for a huge tragedy that happened a century earlier.

In 1889, the young woman Anna Witsen puts an end to her life by drowning herself in the pond of Ewijckshoeve. The estate was at that time owned by the aristocratic Witsen family. The famous etcher / painter / photographer Willem Witsen spent a lot of time there with his artist friends from the ‘Tachtigers’ movement. The death of his sister Anna Witsen did not leave him and his friends untouched. The incident can be found, directly and indirectly, in many artistic expressions from that time.

But who Anna, whose death touched many artists from that time? Schols became fascinated by this young lady and presumed that the basis for her self-chosen death may lie in the fact that she was not ‘seen’ by anyone. In Schols’ imaginary journey, she encounters an enormous duality. She visited the site where the tragedy took place, but at the same time realized that this landscape is the same as where she had such a good time when she grew up.

Jitske Schols’ work consists of landscapes and portraits, often in a distinctive black and white style, characterized by their contrast. Her sometimes abrasive portraits are often photographed at a serene or vulnerable moment and show the playful interaction that can occur between model and photographer… Her photos seem to refer to the black and white portraits of yesteryear, although all digitally shot. This idea of combining the old and new can also be found in the work of Willem Witsen, who as an etcher inspired Schols to use the printing technique Chine-collé for her series Songs for soprano, etude #1. 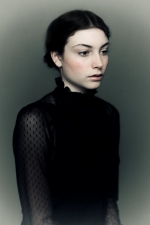 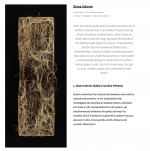